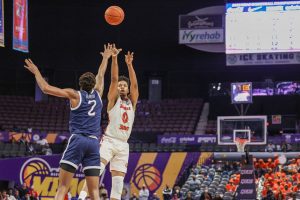 NORFOLK, VA (March 10, 2022) – Fourth-seeded Morgan State took a nine-point lead with just over eleven minutes remaining and held on for a hard-fought 80-77 win over SC State, the fifth seed, Thursday in quarterfinal action of the Mid-Eastern Athletic Conference Tournament.

The Bears, who beat the Bulldogs for the third time this season, earned a trip to Friday’s semifinals against top-seeded Norfolk State, which advanced with a 74-66 triumph over eighth-seeded Delaware State on Wednesday.

Thursday’s SC State – Morgan State matchup was closely contested for most of the game, featuring nine ties and 10 lead changes before the Bears pulled out the win, which pushed Coach Kevin Broadus’ team to 13-13 on the season.

The Bulldogs, who finished the campaign 15-16 — one of the school’s best showings in recent years — also had four players in double figures. Freshman TJ Madlock led the way with 19 points, including a 3-pointer with 42 seconds on the clock, pulling SC State to within three.

Omar Croskey added 11 points before fouling out with 1:47 remaining, while Jemal Davis and Rakeim Gary contributed 10 each in the loss.

Morgan State took a 40-37 lead to the locker room but the Bulldogs got the first four points of the second half to grab a 41-40 lead on two free throws by Davis with17:53 to play. Morgan regained the lead on a layup by Miller moments later and built its largest lead of the game, 60-51, with 11:18 on the clock.

The Bulldogs roared back and closed the gap to one, 75-74, on a Rahsaan Edwards 3-pointer with 1:29 left on the clock. Coming out of a timeout, Burke nailed a corner 3-pointer to put the Bears ahead 78-74 with 1:10 showing. Two free throws by Keith McGee pushed the Morgan State lead to 80-74 with 49.5 on the clock, before Edwards’ third 3-pointer of the game pulled the Bulldogs to within 80-77.

Following a Bear turnover, Edwards put up another shot from long range, but it rimmed out. The Bulldogs had two chances for a put back before Deaquan Williams was fouled with 1.1 on the clock. Williams missed both attempts from the line but got his own miss but his desperation follow heave was no good, giving Morgan State the win.

Both coaches praised the effort by the Bulldogs that just fell short.

“That was a good South Carolina State team that we faced,” said Morgan’s Broadus. “I take my hat off to Coach Madlock, his staff and players as they changed the ‘vibe’ around SC State and I applaud him for his effort.

“We beat them in both regular season games, but neither win was easy. And, it’s a scary time in a tournament, when you are playing a team that you swept during the regular season. But we fought hard and was able to win and advance. We will take that.”

“I give Morgan State and its coaches and players credit for their play, said SC State’s Madlock. They did a great job, fought hard and pulled out the win.

“But, I’m so proud of my team. We were picked to finish close to last in the league, but we fought our way to 15 wins. Now we need to take the next step and get better, beginning with recruiting. I look forward to next year.”

It was a tough Thursday for SC State as both teams were eliminated by Morgan State. The Lady Bulldogs were defeated 66-53 earlier in the day by the Morgan State women.