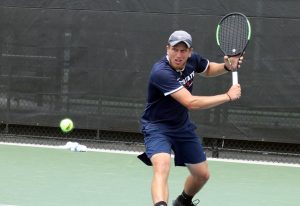 ORANGEBURG, SC (May 2, 2022)–2022 Mid-Eastern Athletic Conference (MEAC) men’s tennis champion South Carolina State won’t have to go far for its first-round opponent in the NCAA Tennis Championships, as the Bulldogs drew No. 10 overall seed South Carolina as the bracket was unveiled Monday evening.

The Bulldogs will face the Gamecocks on Friday, May 6, at a time to be announced in Columbia, S.C. The other two teams in Columbia will be Pepperdine and Washington.

S.C. State (12-9) won its 17th MEAC men’s tennis title — and its 14th in the last 18 years — on Saturday with a 4-0 win over Morgan State at the Cary Tennis Park in Cary, N.C. The Bulldogs are led by MEAC Player of the Year and Rookie of the Year Rostislav Halfinger, as well as MEAC Championship Outstanding Performer Omer Gorgun.

The Gamecocks went 21-6 this season, with a 10-2 mark in SEC play. Daniel Rodrigues and Toby Samuel were both named First Team All-SEC for South Carolina, which fell in the SEC Tournament to Auburn.

Friday and Saturday will see first- and second-round matches on campus sites, followed May 13-14 by Super Regionals. The championships will wrap up starting on May 19 in Champaign, Ill. Every match of the 2022 NCAA Tennis Championships will be streamed live on the TennisONE app.