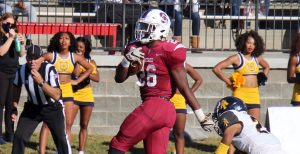 Flowers (RB, 6-0, 210, r-So., Columbia, S.C.) rushed for 153 yards (the third-highest single-game rushing total of his career) and two touchdowns in the Bulldogs’ 33-9 win over Bethune-Cookman. He scored from one yard out near the end of the first quarter and later added a 67-yard touchdown midway through the third quarter.

Davis (LB, 6-2, 190, r-Jr., Blair, S.C.) picked off a pair of passes against Bethune-Cookman, including one he returned 59 yards for a touchdown in the fourth quarter. He also had five tackles (two solo) as the Bulldogs held the Wildcats to just two scores.

Simpkins (OL, 6-5, 310, So., Charlotte, N.C.) recorded seven pancake blocks and graded out at 84 percent against Winston-Salem State as the Eagles racked up 519 yards of total offense and 260 yards on the ground. In 66 snaps, Simpkins did not give up a sack or commit a penalty.

Zimmerman (PK, 5-11, 130, So., Sumter, S.C.) connected on a pair of field goals against Bethune-Cookman, from 32 and 26 yards, and he was also 3-fo-4 in extra points.
Other Top Performers
Jonathan Cardoza-Chicas (Delaware State) tied the program record with a 54-yard field goal against Delaware.

Jared Lewis (Delaware State) threw for 153 yards and a touchdown against Delaware.

Anim Dankwah (Howard) graded out at 88 percent on the offensive line against South Florida.

Phillip Richards (Howard) averaged 39 yards per punt against South Florida, including a 50-yarder.

Ian Wheeler (Howard) ran for 73 yards and a score against South Florida.

Alfonzo Graham (Morgan State) rushed for 89 yards and a touchdown, while also recording a receiving touchdown, against Towson.

Da’Quan Felton (Norfolk State) had three catches for a career-high 131 yards against James Madison, including a 90-yard touchdown (the third-longest play in program history).

Juan Velarde (North Carolina Central) boomed his lone punt of the night for 44 yards and recorded the tackle on the play against Winston-Salem State.