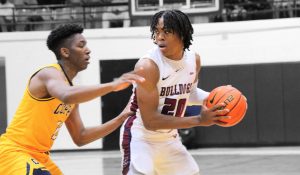 Madlock (G, 6-3, Fr., Memphis, Tenn.) finished with 20 points and five rebounds in the Bulldogs’ win over North Carolina Central on Monday. He was 8-for-12 from the floor and 4-for-5 from the free throw line. This is his third Rookie Honor This Season.

Foster (G, 6-5, Gr., Hampton, Va.) recorded back-to-back 20-point performances for the first time in his career, tallying 20 points in the victory over Maryland Eastern Shore on Saturday and recording 21 points on 50-percent shooting (6-for-12) in the Bison’s win at Delaware State on Monday. For the week, he averaged 20.5 points, 4.0 rebounds and one assist per game.

Sodom (C, 7-3, Sr., Washington, D.C.) averaged 9.0 rebounds and 3.5 blocks per game for the week. He had four blocks and nine boards against Howard and tallied nine rebounds and three blocks against Coppin State. Sodom currently leads the MEAC in total blocks (48) and blocks per game (2.5).

Tyree Corbett (Coppin State) recorded a total of 18 rebounds (12 defensive) and blocked three shots in the Eagles’ two games this week. He posted a double-double of 17 points and 12 rebounds against North Carolina Central.

Carter Myles (Delaware State) scored 24 points on 11-for-20 shooting from the field, including 2-for-3 from 3-point range, and grabbed a game-high-tying nine rebounds against Howard.

Randall Brumant (Howard) blocked two shots against both Maryland Eastern Shore and Delaware State. He added 13 points, two steals and two assists in the win over the Hornets.

Eric Boone (North Carolina Central) averaged 18 points and 4.5 rebounds per game for the week and posted a season-high 28 points with eight rebounds at South Carolina State.

Rashaan Edwards (South Carolina State) shot 55 percent from the field (6-of-11) and 50 percent from 3-point range (4-of-8) to score 17 points in the Bulldogs’ win over North Carolina Central.