ORANGEBURG, SC (October 6, 2021) – Claflin University junior guard Dionna Long was named to the 2021 Central Intercollegiate Athletic Association (CIAA) Women’s Basketball Preseason All-Conference Team, Wednesday morning. After a stellar season that was cut short due to injury, the junior is poised to lead the way for the Lady Panthers this season. 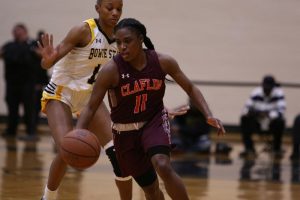 Since ending the 2019-20 season early due to an injury and missing the entire 2020-21 season due to concerns regarding COVID-19, Long is poised to lead a terrific effort for the Lady Panthers. It was a terrific sophomore season that led to the honor for the Lady Panthers junior. When she last took the court, she was the leading scorer on the Lady Panthers, averaging 11.7 points and 4.7 rebounds a game. Unfortunately, she suffered an injury that cut the season short for her. Of the 25 games that she played in, she reached double-digit scoring in 17 of them, including scoring a season-high 20 points against Bowie State.

Long and the Lady Panthers will have a lot to prove when they take the court as the team was picked to finish 12th in the 2021 CIAA Preseason Predicted Order of Finish. The team is also picked to finish sixth in the CIAA Southern Division.  In their last season, injuries plagued the Lady Panthers who finished the season with a 1-26 overall record and a 1-17 record in CIAA play.

The Lady Panthers will open practice on October 15th and the team will kick off the 2021-22 season on November 13th when the team heads to Princess Anne, Maryland to take on the University of Maryland-Eastern Shore Lady Hawks.