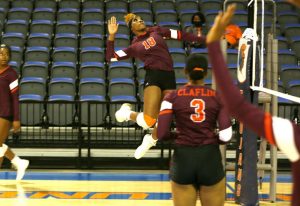 ETTRICK, VA (November 16, 2021) – The Claflin Lady Panthers (15-9) shocked the world, Tuesday evening when the team took a five-set road win over the Virginia State Trojans (15-10) in the quarterfinal round of the 2021 Central Intercollegiate Athletic Association (CIAA) Volleyball Championship Tournament. The fifth-seeded Lady Panthers took a dramatic 25-19, 25-16, 23-25, 21-25, and 15-10 win over the fourth-seeded Trojans to advance to the semifinal round of the tournament.

The next two sets proved to more of a challenge for the Lady Panthers as the team took back-to-back losses. The third set was the most dramatic set of the night with both teams trading strong rallies. After falling into a 6-11 deficit, the Lady Panthers staged a four-point rally to 10-11. The Lady Panthers would tie the set 23-23, but the team allowed back-to-back kills by the Trojans to end with the loss. In the fourth set, it was the Lady Panthers who had to stage the late comeback after falling behind, 11-17. The team would score five unanswered points to cut their deficit to just one point, 16-17 after a kill from Broom. However, the team would never get any closer and finished the set with a 21-25 loss and went into the fifth and final set.

With the set score tied, 2-2, the Lady Panthers would not let their victory slip away as they claimed a dramatic victory in the fifth set. The team took control of the set early with a 6-1 start that was capped by a block by Edouard and Broom. The team went on to go ahead by as many as six points, 12-6 before allowing a 4-1 run by the Trojans, but the team held on to the 13-10 lead. A kill from junior Erin Preston that was followed by a final Broom kill ended the set, 15-10 and sent the Lady Panthers to the semifinal round of the 2021 CIAA Volleyball Championship Tournament.

With the win, the Lady Panthers improve to 15-9 and advances to the semifinal round of the CIAA Volleyball Championship Tournament for the first time in school history. The Lady Panthers will take on the top-seeded Shaw Lady Bears in a 7:30 p.m. match at A.C. Jordan Arena on the campus of Bowie State University.