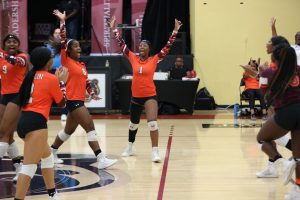 FORT VALLEY, GA (September 9, 2022) – The Claflin University Lady Panthers (3-0) continued their hot start to the season as the team took an impressive three-set road win over the Fort Valley State Wildcats (1-5). The win did not come easy, but the Lady Panthers proved to be up to the challenge when they pulled out the 25-23, 25-21, and 25-20 victory.

It was the Lady Panthers’ combination of a balanced offense and some strong defense that led to the victory. As a team, the Lady Panthers totaled 30 kills in the match. It was senior utility Simone Newell who led the way with 12 kills on 83 total attacks. Senior outside hitter Mya Broom and junior outside hitter Chidera Wilson both added five kills each. Defensively, it was sophomore Jasmine Kirkland who led the team with 16 digs in the match. Broom and freshman opposite side hitter Kaitlin Ham both recorded two blocks (none solo) each.

The third set was a lot less drama as the Lady Panthers took control of the set and never looked back. After neither team managed a lead larger than two points, the Lady Panthers broke out for an eight-point run to go ahead, 20-14. Once in control, the Lady Panthers held off a late surge by the Wildcats. After allowing their lead to be cut down to three points, 23-20, the Lady Panthers got back-to-back points and sealed the win with a block from Broom and Ham to claim the victory.

With the win, the Lady Panthers improve to 3-0 this season. The team will return home for their next action as they will host the Savannah State Tigers. For more information on Lady Panthers volleyball, contact the Claflin University Office of Athletics Media Relations at (803) 535-5548 or log on to www.athletics.claflin.edu.