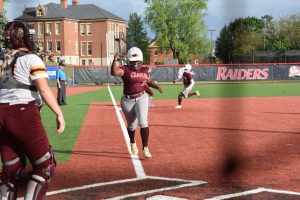 SHIPPENSBURG, PA (May 13, 2022) – The Claflin Lady Panthers (22-14) overcame several different challenges to hold off elimination in the 2022 NCAA Division II Atlantic Region Tournament. In addition to facing a dominating #3 ranked Bloomsburg Huskies (28-20), the Lady Panthers overcame some inclement weather and three extra innings of play to claim a win to secure their first regional tournament win in school history.

It took some strong, clutch play from the Lady Panthers to claim the win as neither team was willing to let the other get anything easily. The Lady Panthers came out with the win despite totaling just seven hits in 10 innings of play. Claflin senior catcher Marion Goins led the way for the Lady Panthers, going two-for-four at the plate with a double. Junior short stop Jaelyn Jackson added a two-for-five batting effort. Junior outfielder Brenay Howard added a pair of runs batted in (RBI) in the game.

Defense dominated much of the game with both teams going scoreless until the seventh inning. Bloomsburg got things started with a two-RBI double to go ahead 2-0. However, the Lady Panthers answered in the bottom of the inning when Howard hit a two-RBI double of her own to answer and to send the game into extra innings. A Lady Panthers runner reached third base in the eighth inning, but was not able to score. After holding the Huskies without a score in the top of the 10th inning, Junior Alexandria Beavers reached on an infield single and she was moved over to second base following a sacrifice bunt from Goins. It was then that the Huskies had a pair of critical back-to-back wild pitches that allowed Beavers to score and sent the Lady Panthers to the walk off victory.

Claflin senior Shaniya Thomas (9-7) took the pitching victory. She got the win after coming in for the two extra innings for the Lady Panthers. She finished the game with no runs allowed on three hits with a strikeout and no walks. Fellow senior Bre’Zhay Chambers started the game and gave a dynamic pitching effort. She threw seven innings and she finished the game with two runs scored (two earned) on six hits with six strikeouts and four walks.

With the win, the Lady Panthers improve to 22-14 and the team and they made school history with the team’s first NCAA Division II Atlantic Region Tournament win in school history. The team will advance to take on the #6 Shippensburg Raiders in a 9:00 a.m. game tomorrow morning. For more information on Lady Panthers softball, contact the Claflin University Office of Athletics Media Relations at (803) 535-5548 or log on to www.athletics.claflin.edu.