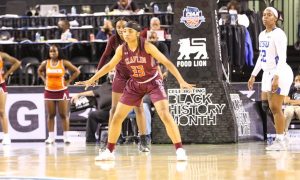 BALTIMORE, MD (February 23, 2022) – The Claflin Lady Panthers (8-19) gave it their all, but in the end, it was not enough as the team took a 70-61 loss to the second-seeded Elizabeth City State Lady Vikings (20-6) in the quarterfinal round of the 2022 Central Intercollegiate Athletic Association (CIAA) Women’s Basketball Championship Tournament. The Lady Panthers made the Vikings work for every point in the tough loss, but foul troubles and some quality defense by Elizabeth State proved to too much for the Lady Panthers to overcome.

With the loss, the Lady Panthers finish the 2021-22 regular season with an 8-19 overall record and their second trip to the CIAA quarterfinal round in school history. For more information on Lady Panthers basketball, contact the Claflin University Office of Athletic Media Relations at (803) 535-5548 or log on to www.athletics.claflin.edu.