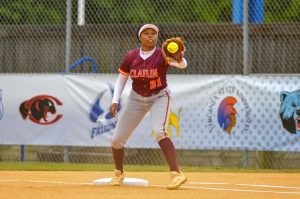 GLEN ALLEN, VA (May 6, 2022) – The top-seeded Claflin Lady Panthers (19-13) looked like the top seed when they took a 7-5 win over the Winston-Salem State Rams (15-11), Friday morning. The Lady Panthers combined some timely hitting with some stellar defense to claim the victory and to advance in the winner’s bracket of the 2022 Central Intercollegiate Athletic Association (CIAA) Softball Championship Tournament.

Though the Lady Panthers were able to get the win the team had to work hard to get it against a Winston-Salem State team that never quit. Offensively, the Lady Panthers totaled 10 hits in the game. Claflin senior center fielder Camryn Hollis led the way when she went two-for-three at the plate with two runs scored. Junior Alexandria Beavers added a two-for-four effort with a home run, five RBI and two runs scored.

It took a while for the Lady Panthers to get started as they allowed Winston-Salem State to take 1-0 lead in the first inning, but the Lady Panthers answered with three runs in the bottom of the inning. Beavers got thing started with a two-RBI triple before scoring on a double steal. The Lady Panthers allowed another WSSU run in the third inning to stay ahead 3-2, but freshman outfielder Kennedy Baskerville added an RBI single to score junior short stop Jaelyn Jackson to keep Claflin ahead 4-2. It was in the fourth inning when Beavers would break thing open with a three-run home run to put the Lady Panthers on top 7-2. From there, the Lady Panthers had to turn to their defense to secure the win as the Rams staged a furious seventh inning rally, scoring three runs and cutting the Claflin down to just two runs, 7-5. Fortunately, the Lady Panthers would clamp down on defense to seal the victory.

The Lady Panthers utilized a three-pronged pitching attack to claim the win. Jackson (9-6) started the game and got the pitching win, going two innings with two runs allowed (two earned) and two strikeouts. Senior Shaniya Thomas came in for 4.1 innings and she recorded three runs allowed (three earned) with six strikeouts. Fellow senior Bre’Zhay Chambers came in for 0.2 innings and closed the game with a strike out.

With the win, the Lady Panthers improve to 19-13 overall. The team would go on to advance in the winner’s bracket and will face the winner of the Virginia State/Bowie State game. For more information on Lady Panthers softball, contact the Claflin University Office of Athletic Media Relations at (803) 535-5548 or log on to www.athletics.claflin.edu.