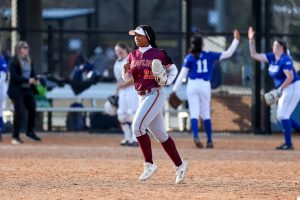 FAYETTEVILLE, NC (April 22, 2022) – The Claflin Lady Panthers (15-13, 13-1 CIAA) took their first Central Intercollegiate Athletic Association (CIAA) loss of the season when the team took a 10-6 loss to the Fayetteville State Broncos (13-15, 8-4 CIAA), Friday afternoon. The Lady Panthers had a strong rally in the later innings, but the team could not overcome and early deficit in the loss.

Things got tough early for the Lady Panthers, but the team got things going in the later innings. Claflin allowed six runs to Fayetteville State in the first inning of the game and would not make an offensive answer until the fourth inning when Beavers reached on an FSU error that allowed junior Camryn Hollis to score. Senior Marion Goins added another score when she reached on an RBI fielder’s choice that cut the Claflin deficit down to just four runs, 6-2, in the fourth inning. After allowing an FSU run in the fourth inning, the Lady Panthers added a pair of sixth inning runs with Beavers hit in an RBI groundout to score junior first base Alexandria Beavers. The Lady Panthers allowed three more sixth inning runs to Fayetteville State to fall behind 10-4 heading into the seventh inning. The Lady Panthers added two more runs, but it was all that the team could muster in the 10-6 loss.

Senior Shaniya Thomas (7-6) took the pitching loss. She finished the game with 10 runs allowed (one earned) with eight strikeouts and just three walks.

With the loss, the Lady Panthers fall to 15-13 overall and 13-1 in CIAA play. The team will close out the regular season when they head to Winston-Salem, North Carolina to take on the Winston-Salem State Rams. For more information on Lady Panthers softball, contact the Claflin Office of Athletic Media Relations at (803) 535-5548 or log on to www.athletics.clalin.edu.