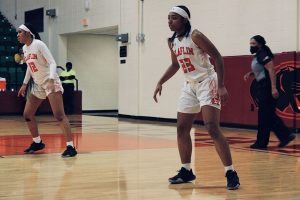 ORANGEURG, SC (November 30, 2021) – The Claflin Lady Panthers (1-5) played some solid defense, but the team could not quite get their offense going in a hard-fought 68-53 loss to the USC-Aiken Pacers (3-3). Though the Lady Panthers had struggles during the game, the team showed some great potential in spots during the game.

As a team, the Lady Panthers had a hard time shooting the ball all game long in the loss. The team shot just 28.4% (19-for-67) in the game. Junior guard Jalah Horton and senior guard Dionna Long led the way for the Lady Panthers with eight points each while sophomore center LaTerrlyn LeShore added seven points with a team-high six rebounds.

With the loss, the Lady Panthers fall to 1-5 to open the season. The team will return to action, Saturday when they host the rival Benedict Lady Tigers in the inaugural Paws Up HBCU Classic.