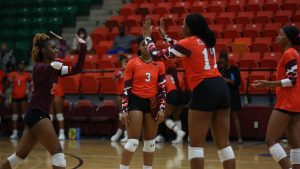 The match was an even one in the beginning, but once the Lady Panthers got things going, the team never looked back as they pulled away for the hard-fought win. The opening set was the most competitive set of the night with neither team wanting to give in. The Lady Panthers were able to take an 11-7 lead over the Rams, but that was the largest lead of the set for either team. The Lady Panthers would play to a 24-23 lead, but the team allowed three unanswered points to the Rams to fall, 24-26.

With the win, the Lady Panthers improve to 13-9 overall and 10-5 in CIAA play. The win also improves the team to 7-2 in the CIAA Southern Division. The Lady Panthers will wrap up the 2021 regular season, Monday when the team heads to Salisbury, North Carolina to take on the Livingstone College Blue Bears.