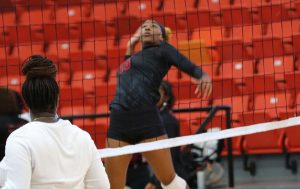 ORANGEBURG, SC (October 11, 2021) – The Claflin Lady Panthers (7-6, 5-2 CIAA) got back to their winning ways when the team took a dominating three-set win over the Saint Augustine’s Lady Falcons (6-8, 4-3 CIAA), Monday evening. The Lady Panthers clicked on all cylinders when the team claimed the victory.

The second set was another emotional battle with the Lady Panthers jumping out to an early 8-1 lead before allowing the Falcons to come back and take a 15-12 set lead. The Lady Panthers answered with and 8-1 run that included four Falcon attack errors. The effort left the Lady Panthers on top, 20-16 before the team cruised to the 25-21 set win.

With the win, the Lady Panthers improve to 7-6 overall and 5-2 in Central Intercollegiate Athletic Association (CIAA) play. The team will return to action, Wednesday when they host the Young Harris College Mountain Lions in a 6:00 p.m. match.