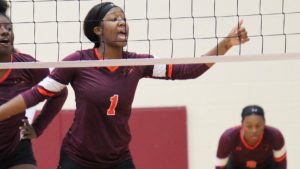 ORANGEBURG, SC (Sept. 20, 2021) – The Claflin Lady Panthers (2-3) put on their best offensive showing of the early season when the team took a dominating three-set win over the Allen (S.C.) Yellowjackets, Monday evening. Combined with the team’s always impressive defense, the Lady Panthers rolled to the 25-15, 25-16, and 25-12 victory.

The Lady Panthers clicked on all cylinders to claim the win. The team combined a dominating offensive effort with a stifling defense to claim the win. Offensively, it was sophomore outside hitter Danielle Branch who led the way for the Lady Panthers with a season-high 10 kills in the match with four service aces.   Junior outside hitter Simone Newell added nine kills as well. It was the setter duo of junior Erin Preston and senior Monae Rowser who coordinated the effort with 25 combined assists. Preston recorded 14 assists while Rowser added 11 assists.

With the win, the Lady Panthers improve to 2-3 on the season. The team will return to action, Thursday when the team begins Central intercollegiate Athletic Association (CIAA) play when the team hosts the Livingstone College Blue Bears in a 6:00 p.m. match.