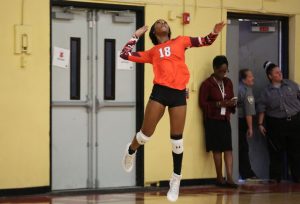 RALEIGH, NC (October 3, 2022) – After taking back-to-back losses for the first time this season, the Claflin Lady Panthers (8-3, 3-3 CIAA) returned to the winner’s circle with four-set win over the Saint Augustine’s Falcons (2-5, 2-5 CIAA), Monday evening. The Lady Panthers broke out a powerful offensive attack to get back to their winning ways.

With the win, the Lady Panthers improve to 8-3 overall and 3-3 in CIAA play. The team will return home for their next action when they host the Clinton Golden Bears, Wednesday evening. For more information on Lady Panthers volleyball, contact the Claflin University Office of Athletics Media Relations at (803) 535-5548 or log on to www.athletics.claflin.edu.