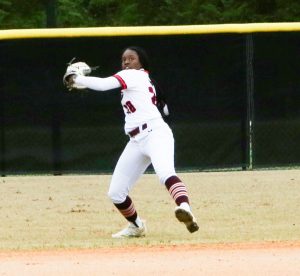 FAYETTEVILLE, NC (April 22, 2022) – The Claflin Lady Panthers (15-12, 13-0 CIAA) won their 13th straight Central Intercollegiate Athletic Association (CIAA) game when the team rallied late for an 11-3 road win over the Fayetteville State Broncos (12-15, 7-4 CIAA), Friday afternoon. After trailing late in the game, the Lady Panthers broke out in the final two innings to claim the dominating victory.

As a team, the Lady Panthers had a solid overall outing in the game. The team totaled 11 hits in the game. Freshman outfielder Kennedy Baskerville led the way for the Lady Panthers with a three-for-four batting effort that included two runs scored and two RBI. Junior Brenay Howard added a two-for-three batting effort with two runs scored while senior catcher Marion Goins added a two-for-four effort that included a home run.

Senior Bre’Zhay Chambers (7-5) brought home the pitching win as she started the game and went all six innings of the game. She recorded 10 strikeouts with only one walk and only seven hits allowed in the game.

With the win, the Lady Panthers improve to 15-12 overall and 13-0 in CIAA play. The two teams would go on to complete the doubleheader later in the day. For more information on Lady Panthers softball, contact the Claflin Office of Athletic Media Relations at (803) 535-5548 or log on to www.athletics.claflin.edu.