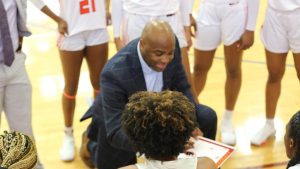 CHARLOTTE, NC (September 26, 2022) – The Claflin Lady Panthers were recognized for some solid late-season play last season as the team was picked to finish tied for eighth in the 2022 Central Intercollegiate Athletic Association (CIAA) Women’s Basketball Pre-Season Predicted Order of Finish, Monday morning. The team earned the finish after closing the 2021-22 season as one of the hottest teams in the conference.

The Lady Panthers’ eighth place prediction was far better than the team’s 12th place prediction last season. During the 2021-22 season, Claflin turned out to be one of the surprise teams in the conference. The Lady Panthers closed the season with wins in two of their last three games, including a 63-60 win over the CIAA Southern Division champion Johnson C. Smith Lady Golden Bulls and a 68-56 win over the Virginia Union Lady Panthers in the opening round of the 2021-22 CIAA Women’s Basketball Championship Tournament

With some great leadership returning and some quality newcomers, the Lady Panthers will look to prove the predictions wrong once again with a terrific effort in the upcoming season. The Lady Panthers will return nine players from the team with some great newcomers. Senior forwards Breanna Price and Destiny Coleman will lead the way for the team along with sophomore guards Janelle Sample and Lauren Scott. Price will enter the season as the team’s leading returning scorer after averaging 10.2 points per game with 5.6 rebounds per game. Coleman returns as the team’s leading rebounder with 5.6 rebounds per game. Sample and Scott were two of the top newcomers last season and will look to step things up after a full season of competition. Sample earned a spot on the 2021-22 CIAA All-Rookie Team while Scott earned CIAA Rookie of the Week honor twice.

The Lady Panthers will open the 2022-23 season on the road when they head to Tigerville, South Carolina to take on North Greenville. The team will open homecourt on November 19th against Morris.

For more information on Lady Panthers basketball, contact the Claflin University Office of Athletics Media Relations at (803) 535-5548 or log on to www.athletics.claflin.edu.