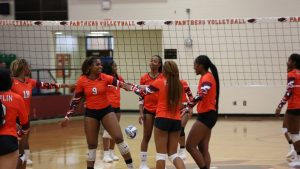 CHARLOTTE, NC (August 24, 2022) – The Claflin University Lady Panthers volleyball was picked to finish fifth overall in the 2022 Central Intercollegiate Athletic Association (CIAA) Volleyball Preseason Predicted Order of Finish.  After shocking the conference with their terrific performance last season, the Lady Panthers won’t sneak up on anyone this season after being predicted to finish fifth overall and second in the CIAA Southern Division.

The Lady Panthers earned the fifth-place prediction after a terrific 2021 season. The team finished the season with a 15-10 overall record with an 11-5 record in CIAA play. After being picked to finish eighth in the preseason, the Lady Panthers finished the season ranked fifth overall and second in the CIAA Southern Division. After finishing the regular season ranked fifth overall, the Lady Panthers upset the fourth-seeded Virginia State Trojans to advance to the semifinal round of the 2021 CIAA Volleyball Championship Tournament.

For more information on Lady Panthers volleyball, contact the Claflin University Office of Athletics Media Relations at (803) 535-5548 or log on to www.athletics.claflin.edu.