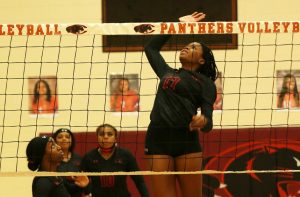 The Lady Panthers took the win behind one of their best offensive efforts of the season. The team totaled 46 kills in the match, the second most of the season. It was the tandem of junior Simone Newell and sophomore Danielle Branch who led the way for the Lady Panthers with 11 kills each. Junior Mya Broom added nine kills of her own. Defensively, the Lady Panthers freshman middle blocker Taneja Robinson had a great night with seven total blocks (none solo) while senior outside hitter Makaylen Crosby added four (none solo).

In the following two sets, the Lady Panthers put on a pair of dominating performances to claim back-to-back wins, 25-10 and 25-20. However, in the fourth set, the shoe was on the other foot for the Lady Panthers as the team fell, 16-25. But the team soon got back into gear when they rolled to the 15-5 win in the final set of the match.

With the win, the Lady Panthers improve to 10-8 overall and 7-4 in Central Intercollegiate Athletic Association (CIAA) play. The team will return to action, Monday, October 25th, when they head to Winston-Salem, N.C. to take on the Winston-Salem State Rams in a 6:00 p.m. match.