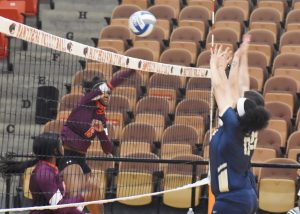 As a team, the Lady Panthers put on one of their best defensive performances of the season when they only allowed 43 combined points to the Blue Bears in the win. The Lady Panthers held the Blue Bears to just 18 kills for the entire match while compiling 28 kills of their own. Junior middle hitters Mya Broom led the way for the Lady Panthers with eight kills and five block assists in the match. Senior middle blocker Sadaiya Edouard added four block assists. Sophomore outside hitter Danielle Branch also had eight kills as well.

With the win, the Lady Panthers improve to 3-3 to open the season. The team will hit the road for their next action as they will head to Charlotte, North Carolina to take on the Johnson C. Smith Lady Golden Bulls, Monday.