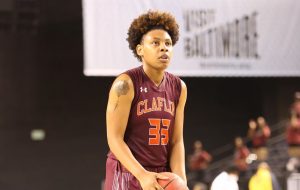 After earning the 10th seed after the regular season, Claflin interim women’s basketball head coach Terrance Jenkins applauded the effort that the team needed to pull off the opening round win. “I am very proud of the ladies. They came out apprehensive about how we would come out, but we came out hitting on all cylinders, played solid defense and executed in all phases,” Jenkins said.

The Lady Panthers claimed the win behind some great play at both ends of the court. As a team, they held Virginia Union to just 56 points and forced them to shoot 34.9% (22-of-63) from the floor. Claflin junior Destiny Coleman led the way for the Lady Panthers with a double-double 16 points and 11 rebounds in the game. Freshman Lauren Scott added 15 points with seven rebounds as well while fellow freshman Janelle Sample added 14 points with four rebounds in the game.

It was the strong start that keyed the win for the Lady Panthers. The team opened the game with a 14-7 lead after a first quarter that included a 9-4 lead after a lay-up from senior guard Dionna Long with 3:48 left in the first quarter. The Lady Panthers followed the effort with an even stronger second quarter. A pair of free throw from freshman guard Blesseth Dillingham left the Lady Panthers on top, 20-10 with 2:18 left in the second quarter. The quarter was capped by a Coleman buzzer-beater jumper that gave the team a 33-12 halftime lead.

During the quarter, the Lady Panthers found themselves holding on to an eight-point lead, 60-52, before going on an 8-3 run of their own to close out the game.

With the win, the Lady Panthers will advance to the quarterfinal round of the 2022 CIAA Women’s Basketball Championship Tournament where they will face the Elizabeth City State Lady Vikings. For more information on Lady Panthers basketball, contact the Claflin University Office of Athletic Media Relations at (803) 535-5548 or log on to www.athletics.claflin.edu.