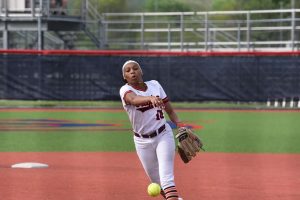 SHIPPENSBURG, PA (May 16, 2022) – The Claflin Lady Panthers (23-15) gave a spectacular effort, but the team came up short in an 11-0 loss to the Seton Hill Griffins (39-10). The Lady Panthers played a solid game, but the team could overcome some costly struggles at the plate and in the field in the hard-fought loss.

As to be expected of a regional championship game, hits were hard to come by for the Lady Panthers. As a team, Claflin was held to just five hits, including no extra base hits. Senior second base Jada Garrick led the Lady Panthers’ effort with a two-for-three performance.

With the loss, the Lady Panthers finish the 2022 season with a 23-15 overall record. The season was an historic one for the Lady Panthers as they reached the championship game of the NCAA Division II Atlantic Region Tournament for the first time in school history and set a school record for NCAA tournament victories.