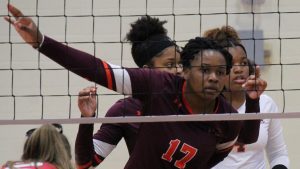 ORANGEBURG, SC (Sept. 13, 2021)  – The Claflin Lady Panthers (1-2) once again showed some terrific fight, but the team could not quite pull out the victory when the team took a four-set loss to the Bluefield State Big Blues (2-3), Monday. After an impressive start to the match, the Lady Panthers ran into some struggles midway through the match that cost the team the match. The Lady Panthers gave a terrific effort in the fourth set of the match, but it was not enough for the team to claim the victory.

As a team, the Lady Panthers had a solid overall match, especially defensively. The team totaled 95 digs in the match with senior libero Trinity Fierce leading the way with 26 in the match. Junior middle blocker Sadaiya Edouard added eight total blocks (four solo). Offensively, it was the duo of junior Simone Newell and Edouard both added seven kills to lead the Lady Panthers’ offensive efforts.

With the loss, the Lady Panthers fall to 1-2 overall. The two teams will meet on the court once again when the Lady Panthers head to Bluefield, West Virginia to take on the Big Blues, Thursday. For more information on Lady Panthers volleyball, contact the Claflin University Office of Athletic Media Relations at (803) 535-5548 or log on to www.athletics.claflin.edu.