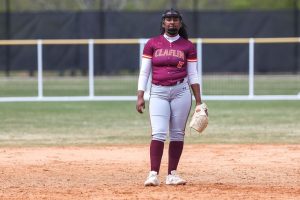 WINSTON-SALEM, NC (April 23, 2022) – The Claflin Lady Panthers (17-13, 15-1 CIAA) finished the regular season in style when the team took a 5-0 road win over the Winston-Salem State Rams. With the win, the Lady Panthers finish the season in first place in the Central Intercollegiate Athletic Association (CIAA) Southern Division and with the best record in conference play.

The Lady Panthers took the win behind some solid hitting and some great defense. As a team, the Lady Panthers held Winston-Salem State scoreless for the game and allowed just five hits, including no extra base hits in the game. Senior outfielder Camryn Hollis added a two-for-four batting effort with two runs scored. Freshman outfielder Kennedy Baskerville added a two-for-three batting effort with a run scored.

Claflin junior Jaelyn Jackson (2-2) took the pitching victory. She started the game and she threw five innings with no runs allowed on five hits with 10 strikeouts and four walks. Senior Shaniya Thomas came in for a pair of innings and she recorded three strikeouts on no hits allowed.

With the win, the Lady Panthers complete the regular season with a 17-13 overall record and a 15-1 record in CIAA play. The team will now await seeding for the upcoming 2022 CIAA Softball Championship Tournament. For more information on Lady Panthers softball, contact the Claflin University Office of Athletics Media Relations at (803) 535-5548 or log on to www.athletics.claflin.edu.