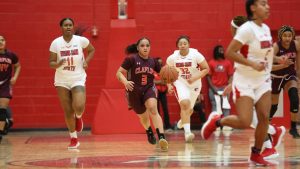 OCCASION: Two seniors will be honored in pregame ceremonies before the start of the men’s game. Graduate transfer student-athletes Deaquan Williams and Edward Oliver-Hampton.

LAST TIMEOUT: The men complete an season sweep over UMES after a 70-63 victory over home Saturday (Feb.19). On the women’s side the Lady Bulldogs dropped their seventh straight in a 65-57 defeat to the Lady Hawks.

UP Next for SC State
South Carolina State will close out regular season on the road in a three-game road swing, beginning with Norfolk State (Feb.26th ), Howard (Feb.28th ) and NC Central (Mar. 3rd).  The 2022 Mid-Eastern Athletic Conference Basketball Tournament will be held March 9th -12th in Norfolk, VA at the Scope Arena. For more information on how to purchase tickets visit www.meacsports.com