Lady Panthers Dominate for a 14-1 Win Over Livingstone 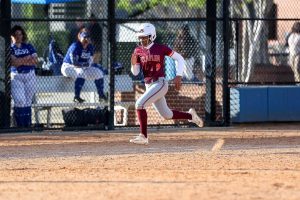 ORANGEBURG, SC (April 8, 2022) – The Claflin Lady Panthers (11-8, 9-0 CIAA) rolled to a dominating 14-1 win over the Livingstone Lady Blue Bears (0-8, 0-8 CIAA), Friday afternoon. The Lady Panthers clicked on all cylinders when the team took the win as they combined some great hitting with great pitching and defense to claim the victory.

The Lady Panthers put on a great performance in every aspect of the game to claim the victory. In addition to a terrific pitching and defensive effort that held the Blue Bears to just one run on one hit, the Lady Panthers totaled 13 hits in the game. Senior outfielder Camryn Hollis led the way for the Lady Panthers with a three-for-four batting effort, including a double and two runs scored in the game. She also added an RBI. Junior first base Alexandria Beavers added a great effort as well. She finished the game with a two-for-four batting effort that included a double and a triple with a run scored.

After allowing a first inning run to the Blue Bears, the Lady Panthers scored 14 unanswered runs to claim the win. The third inning was the biggest one for the Lady Panthers as the team scored eight runs during the inning.

The team also benefitted from a terrific pitching performance from senior Shaniya Thomas (6-3). She started the game, and she pitched all five innings. She allowed just one hit and she recorded 11 strikeouts and only two walks.

With the win, the Lady Panthers improve to 11-8 overall and remain undefeated in Central Intercollegiate Athletic Association (CIAA) play at 9-0. The two teams would go on to close out the doubleheader later in the day. For more information on Lady Panthers softball, contact the Claflin Office of Athletic Media Relations at (803) 535-5548 or log on to www.athletics.claflin.edu.