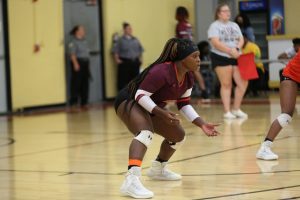 The Lady Panthers dominated every set of the match to claim their win. The team opened the match by only allowing nine Livingstone points. The highlight of the set was a 10-point Claflin run that put the team on top, 13-3. From there, the cruised to the win, but not before mounting an eight-point run later in the set as well. The Lady Panthers continued to control the match with another dominating performance in the second set. In the second set, the Lady Panthers had several smaller runs, including a six-point run that kept them on top, 10-1. From there, the team cruised to the set win by outscoring the Blue Bears, 15-9. The third set was slightly different. When the Lady Panthers found themselves trailing 7-11. The team responded with six straight points. The run was capped by a Broom kill that left the Lady Panthers on top, 13-11. After staying on top, 19-17, the Lady Panthers pulled away to claim the win with a 6-1 run. It was a kill from sophomore middle hitter Taneja Robinson that sealed the victory.

With the win, the Lady Panthers improve to 5-0 and, more importantly, the team opens  CIAA play with a 1-0 record. For more information on Lady Panthers volleyball, contact the Claflin University Office of Athletics Media Relations at (803) 535-5548 or log on to www.athletics.claflin.edu.