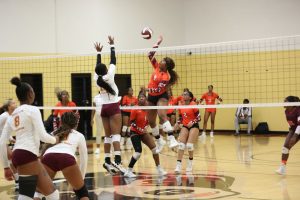 ORANGEBURG, SC (October 5, 2022) – The Claflin Lady Panthers (9-3) returned to their winning ways with a dominating three-set win over the short-handed Clinton College Golden Bears (4-8), Wednesday evening. The Lady Panthers combined an efficient offense with some stellar defense to pull away with the victory.

It was the Lady Panthers’ strong overall play that led the team’s victory. Offensively, the Lady Panthers did a great job with 28 total kills in the match while forcing 32 attack errors by the Golden Bears. Defensively, the team was even better with 49 digs and 10 total blocks (four solo). Senior outside hitter Simone Newell led the way with nine kills and 12 digs in the match. She led three Lady Panthers who reached double digit digs in the match as senior defensive specialist Ayanna Harrison and freshman setter Me’Auhre Lewis both added 11 digs. Freshman middle blocker Kaitlin Ham joined Perry with four total blocks (two solo) as well.

There was much less drama in the third set as the Lady Panthers dominated to claim the win. A Claflin six-point run gave the team a 14-9 lead early in the set while a 9-2 run sealed the victory.