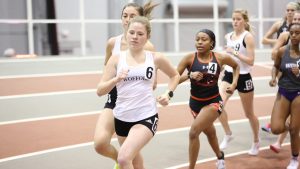 CENTRAL, SC (April 3, 2022) – The Claflin University women’s track & field team showed some great improvement at the Gotta Run Invite hosted by Southern Wesleyan University. The Lady Panthers continued to perform well both on the track and in field events at the meet.

On the track, the Lady Panthers distance runners had one of their best performances of the season. Freshman Madison McDonald led the way with an 11:55.56 in the women’s 3000m run to place sixth. Senior Sky Buie-Cox placed ninth in the event with a 12:01.3. The times are two best in the Central Intercollegiate Athletic Association. The Lady Panthers’ sprinters were also impressive with freshman Zoe Adams continuing to lead the way. She placed seventh in the women’s 100m dash with a 12.58.

In field events, the Lady Panthers’ throwers continue to be impressive. Senior Zaria Nelson continued to impress when she placed second in the event with a 40’8.75″ (12.41m) throw. She followed the effort by winning the women’s discus throw with a 137’1″ (41.78m) throw. The distance is the third best in the CIAA.

The Lady Panthers will return to action on April 16th when the team heads to Columbia, South Carolina to take part in the Gamecock Invitational. For more information on Lady Panthers track & field, contact the Claflin University Office of Athletic Media Relations at (803) 535-5548 or log on to www.athletics.claflin.edu.