Lady Panthers Close Out Senior Day with a 12-1 Win Over Johnson C. Smith 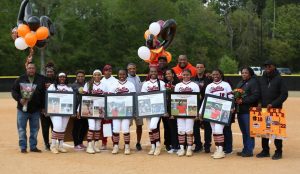 The Lady Panthers did the bulk of their work in the second inning when the team scored eight runs. After allowing a fourth-inning run to the Golden Bulls, the team added four fourth-inning runs to and clamped down on defense to seal the 12-1 victory.

Senior pitcher Bre’Zhay Chambers (6-4) got the start and took home the pitching win. She started the game and she threw all five innings to claim the win. She recorded six strikeouts in the effort with no earned runs allowed.

With the win, the Lady Panthers improve to 14-8 overall and remain perfect at 12-0 in Central Intercollegiate Athletic Association (CIAA) play. The team will return to the road for their next action when they head to Aiken, South Carolina to take on the USC-Aiken Pacers. For more information on Lady Panthers softball, contact the Claflin University Office of Athletic Media Relations at (803) 535-5548 or log on to www.athletics.claflin.edu.