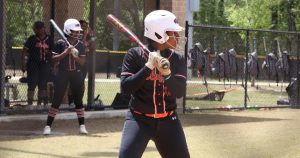 AIKEN, SC (April 19, 2022) – The Claflin Lady Panthers (14-9) put on one of their top performances of the season, but it was not quite enough as the team took a heartbreaking 1-0 road loss to the USC Aiken Pacers. The Lady Panthers took a 0-0 tie into the bottom of the seventh inning when a Pacer RBI double ended the game.

Though the team took the loss, the Lady Panthers played extremely well in the game. Both teams totaled just six hits each in the game, but in the end, the USCA score was the only run allowed in the hard-fought game. Claflin senior catcher Marion Goins led the way for the team with a two-for-three batting effort while freshman Kennedy Baskerville added a two-for-three batting effort of her own.

Senior pitcher Shaniya Thomas (7-4) took the pitching loss despite a great performance. She finished the game with only one earned run allowed on six total hits with six strikeouts. She also only had four walks.

With the loss, the Lady Panthers fall to 14-9. The two teams would go on to complete the doubleheader later in the day. For more information on Lady Panthers softball, contact the Claflin University Office of Athletics Media Relations at (803) 535-5548 or log on to www.athletics.claflin.edu.