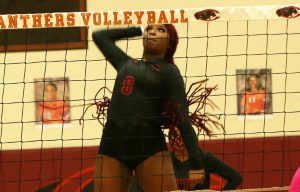 FAYETTEVILLE, NC (October 29, 2021) – The Claflin Lady Panthers (11-9, 8-5 CIAA) gave it their all, but the team struggled against some tough defense in a three-set road loss to the Fayetteville State Lady Broncos (16-6, 10-2 CIAA). In a match that featured the two top teams in the Central Intercollegiate Athletic Association (CIAA) Southern Division, it was defense that told the story as the Lady Panthers offense could not quite find its groove against the Lady Broncos.

Throughout the entire match, the Lady Panthers were able to make plays in spots, but the team could not quite generate any sustained runs.  In the first set, the team managed back-to-back scores on just five occasions in the 13-25 opening set loss. The second set saw a better effort in the second set when the team mounted a seven-point run that included two service aces from junior outside hitter Simone Newell. The effort left the team trailing, 13-16. However, it was as close as the Lady Panthers would get for the remainder of the 16-25 second set loss. In the third set, the Lady Panthers continued to struggle as a three-point run that included a kill from senior Makaylen Crosby and back-to-back FSU attack errors were as much as the team could put together in the 15-25 loss.