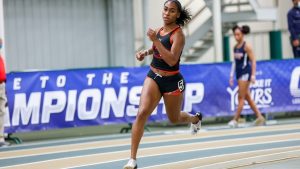 CHARLOTTE, NC (February 14, 2022) – After a dominant effort on the track has paid off for Claflin freshman Zoe Adams as she was named the 2022 Central Intercollegiate Athletic Association (CIAA) Women’s Indoor Track Athlete of the Year. The announcement was made, Monday, at the 2022 CIAA Indoor Track & Field Championship Meet.

Adams earned the honor after a terrific indoor track & field season. She is currently one of the top sprinters in the NCAA Division II Atlantic Region. Her time of 56.48 is the top time in the region and it is also an NCAA provisional qualifying time as well. She also has the fourth best time in the region in the women’s 200m dash. She ran a 25.20# at the Camel City Invitational. Both times are the top times in the CIAA.