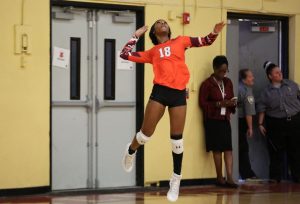 It was one of the team’s best offensive performances of the season that powered the Lady Panthers to the victory. As a team, the Lady Panthers totaled 52 kills in the match with six service aces. Claflin senior Simone Newell led the way for the team with 14 kills in the match while fellow senior outside hitter Mya Broom and junior outside hitter Chidera Wilson both added 10 kills each. Defensively, Claflin senior Jasmine Kirkland added 27 digs while Newell added eight digs. Claflin sophomore Taneja Robinson added four total blocks (none solo). Broom added four total blocks (none solo) as well.

In the second set, the Lady Panthers faced their toughest challenge of the season with their first set loss of 2022. After trailing the Tigers by just two points, 19-21, the Lady Panthers ran out of time as they allowed Savannah State to close the set, 22-25.

With the win, the Lady Panthers improve to 4-0. The team will return to action, Thursday, when they open Central Intercollegiate Athletic Association (CIAA) play with a road match against the Livingstone College Blue Bears. For more information on Lady Panthers volleyball, contact the Claflin University Office of Athletics Media Relations at (803) 535-5548 or log on to www.athletics.claflin.edu.