Lady Bulldogs Fall On The Road To Coppin State 80-55 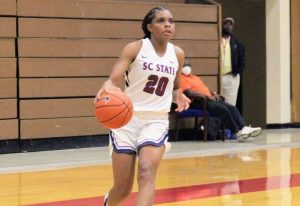 BALTIMORE, MD (February 12, 2022) – Trinity Klock and Mekayla Lumpkin each scored 11 each but it wasn’t enough as South Carolina State dropped their fifth straight league contest in an, 80-55, decision to Coppin State Saturday (Feb.12th) at PEC Arena.

SC State led the way in bench points 36-18. Coppin State had four players posting double figures with Jaia Alexander leading the way with 25 points, Mossi Staples with 15, Jalynda Salley with 13 and Aliyah Lawson with 11 on the day.

Up Next: South Carolina State will wrap of the second of two-game road trip against Morgan State on Monday (Feb.14th) in a 5 p.m. start. SCSU then return home for the final of a two-game home stretch of the regular season versus Maryland-Eastern Shore(Feb. 19th) on Saturday in the first of a double-header beginning at 2 p.m., followed by a showdown with Delaware State 5:30 p.m. on Monday (Feb. 21st).