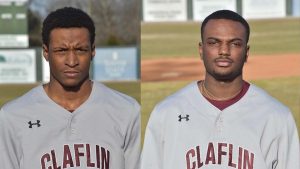 MARTINEZ, GA (May 12, 2022)  – The Claflin outfield duo of senior Steven Joyner and sophomore Kobe Miller were recognized for a season of terrific play when they were named to the 2022 Peach Belt (PBC) All-Conference Team, Thursday afternoon. The duo are the first Claflin Panthers to earn all-conference honors in the Peach Belt after being named to the second team, Thursday.

Joyner earned his spot on the team after some great play both on defense and at the plate. He finished the 2022 season with a .365 batting average, recording 27 hits in 74 at-bats. He also added four two triples, and three home runs. The effort left him ranked fifth in the Peach Belt at the end of the regular season. Defensively, he compiled a 1.000 fielding percentage with 67 put-outs and three assists in 70 total chances. The effort came in spite of missing a significant portion of the season due to an injury.

Miller earned his spot on the team on the team after a great season. Offensively, he finished the regular season ranked second in the conference with a .379 batting average with 10 doubles and three triples. He’s also added 30 runs scored with 23 RBI.

The honors mark the first time in school history that members of the Claflin Panthers were named to the Peach Belt All-Conference team. The school joined the conference as an associate member in baseball in 2019.

For more information on Panthers baseball, contact the Claflin University Office of Athletics Media Relations at (803) 535-5548 or log on to www.athletics.claflin.edu.