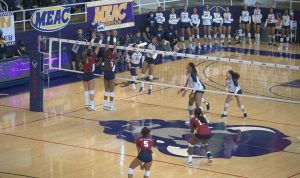 The Bison (16-12) advanced to Saturday’s semifinal, where they will face either North Carolina Central or Maryland Eastern Shore at 5 p.m.

Bria and Cimone Woodard led the Bison with five kills each, and Cimone hit .500 after committing just one error in eight swings. Bria, the 2021 MEAC Rookie of the Year and a First Team honoree, hit .364 for the match and had nine digs and four service aces.

Busi Banda had eight aces, as Howard out-served South Carolina State 17-4. The Bison hit .351 as a team while holding the Bulldogs to negative-095.

Howard opened the match strong, jumping out to a 20-3 lead in the first set after Bria Woodard notched back-to-back aces.

That momentum carried through the rest of the match – to the point where Howard saw 17 players play. Twelve of those players recorded at least one point.