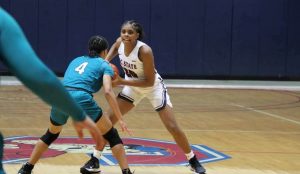 Gwynn (5-9, Fr., G, Wethersfield, Conn.) led the Bulldogs in scoring in three of their four games this past week, including a pair of 22-point games against Wake Forest and Mississippi State. She hit six 3-pointers in the Mississippi State contest, and Gwynn also had 16 points to lead South Carolina State against Troy.

Other Top Performers
Downs (5-10, Sr., G, Fredericksburg, Va.) averaged 21.0 points, 8.0 rebounds and 3.5 steals in two games for the Spartans this past week, going a combined 12-for-25 (48.0%) from the floor and hitting 16 of her 20 free throws. Against UNC Wilmington, Downs recorded her second double-double of the season with a career-high 22 points and 10 rebounds, to go along with four steals and a block, before turning in a 20-point, 6-rebound, 3-steal, 2-assist effort against William & Mary.

Lawson (5-7, r-Jr., G, Ontario, Canada) made a career-high seven 3-pointers to lead all scorers with 21 points in a home win over Winthrop, while also grabbing four steals on the defensive end and accounting for three rebounds. Lawson has scored in double figures in six straight games, with two 20-point efforts in that span.

Carter (6-1, r-So., F, Tucson, Ariz.) grabbed a program Div. I-record 21 rebounds (15 on the defensive end) in the Eagles’ win over Johnson & Wales, while also grabbing three steals and blocking a pair of shots. Her effort on the glass helped NCCU set a new program record with 72 team rebounds.

Jewel Watkins (Coppin State) grabbed a career-high 12 rebounds to go along with six points against Winthrop.

Destiny Howell (Howard) dropped 22 points on 9-for-20 shooting against UMBC.

Ashlyn Lockard (North Carolina Central) had 18 points and eight rebounds against Johnson & Wales, going 8-for-12 from the floor.