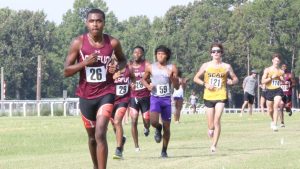 CHARLOTTE, NC (September 14, 2022) – It didn’t take long for Claflin freshman Reginald Gore to make an impact as he was named the Central Intercollegiate Athletic Association (CIAA) Men’s Cross Country Runner of the Week, Wednesday morning. The honor came after his performance at the Carolina Challenge, the first collegiate competition of his career.

During the Carolina Challenge, Gore had a terrific performance. He led all Claflin runners in the men’s 5K run with an 18:39.50 and he placed 21st in the event. The level of competition at the meet was especially impressive as he competed against runners from two NCAA Division I teams as well as one of the top teams from the Southern Intercollegiate Athletic Association (SIAC).

Gore and the Panthers will return to action, Saturday, when the team takes part in the Furman Invitational. For more information on Panthers cross country, contact the Claflin University Office of Athletics Media Relations at (803) 535-5548 or log on to www.athletics.claflin.edu