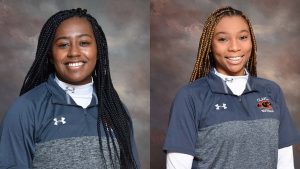 CHARLOTTE, NC (April 11, 2022) – The honors just keep coming in for the Claflin Lady Panthers’ softball team when senior pitcher Shaniya Thomas was named the Central Intercollegiate Athletic Association (CIAA) Food Lion Pitcher of the Week while Goins was honored as the CIAA Food Lion Defensive Player of the Week.

The honor marked the second straight week for Thomas after she put on a dominating performance in back-to-back games. In twos starts, she allowed just three hits with one run and she totaled 21 strikeouts. She finished the week with a 0.58 earned run average (ERA).

Thomas wasn’t the only Lady Panther to dominate the defense as fellow senior Marion Goins was honored as the CIAA Food Lion Defensive Player of the Week. She spent time at the catcher position in all four games for the Lady Panthers and she finished the week with a perfect 1.000 fielding percentage with 27 putouts and two assists to lead the Lady Panthers to four wins and allowed just two runs in the four games. She also caught a runner stealing.

The Lady Panthers will be back in action, Wednesday, when the team hosts the USC Aiken Pacers. For more information on Lady Panthers softball, contact the Claflin University Office of Athletic Media Relations at (803) 535-5548 or log on to www.athletics.claflin.edu.