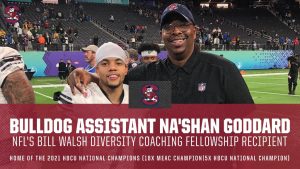 The Chicago Bears have added six college coaches to Matt Eberflus’ staff for minicamp and training camp as part of the Walsh Diversity Coaching Fellowship.

The program’s objective is to give coaches opportunities to observe, participate and gain experience with NFL clubs, and help them eventually land full-time positions in the league.

“We are very excited to welcome six new coaches to this year’s training camp staff,” Eberflus said. “We are eager to work together to reach a common goal and are looking forward to learning from each other. I am confident that these six bright coaches will be great assets to our team, and I’m excited to see them grow and develop over the course of training camp.”

GODDARD is entering his fifth season as South Carolina State’s offensive line coach. As a player, he spent time with the Giants, Jets, Seahawks and Saints in the NFL; the Florida Tuskers and Virginia Destroyers in the UFL and the Calgary Stampeders in the CFL.

WILLIAMS was selected by the Bears in the third round of the 2002 NFL Draft. He spent just one season with the team, appearing in 13 games with two starts and recording 20 tackles, two pass breakups and two fumble recoveries as a rookie. He also played with the Browns in 2003. Williams is entering his third season as defensive backs coach at Hardin-Simmons. He spent the previous two years at ASA Miami College as associate head coach/defensive coordinator in 2018 and head coach in 2019.

ANDERSON is beginning his second season as defensive coordinator and linebackers coach at Fayetteville State. He spent the previous three years as defensive coordinator at the University of Pikeville. Anderson played football at St. Thomas Aquinas High School and Wake Forest University, the same two schools as former Bears running back Brian Piccolo. Anderson returns to Illinois after serving as defensive backs coach at Illinois State (2011-14) and the University of St. Francis in Joliet (2015).

HYNSON boasts 19 years of collegiate coaching experience, including the last four as passing game coordinator and receivers coach at Oregon State. He previously served as receiver’s coach at Hawaii in 2016-17. He has participated in NFL minority fellowship programs with the Lions, Texans, Chiefs, Raiders and Seahawks.

MERCHANT is entering his first season as quarterback’s coach at Pace University. Before that, he worked as an assistant at ASA College (2017), Howard University (2018-19), University of Buffalo (2020) and Long Island University (2021).