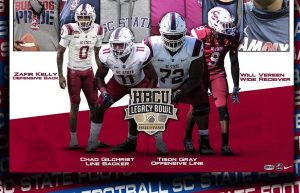 ORANGEBURG, SC (February 18, 2022) – South Carolina State athletics will be on prominent display Saturday at the inaugural Legacy Bowl at Tulane’s Yalman Stadium in New Orleans. The contest is set for 4 p.m. EDT and will be televised live by the NFL Network.

Four players from SCSU’s 2021 Celebration Bowl-winning squad (7-5, 5-0 MEAC) will be among 16 from the Mid-Eastern Athletic Conference (MEAC) participating in the contest, which will give players from Historical Black Colleges and Universities (HBCUs) an opportunity to showcase their talent in front of scouts and other team personnel from National Football League (NLF) teams.

Representing the Bulldogs on Team Gaither — made up of players from the MEAC and Central Intercollegiate Athletic Association (CIAA) – will be LB Chad Gilchrist, OL Tison Gray, DB Zafir Kelly and WR Will Vereen. Bulldog head coach Buddy Pough will be the Co-head coach of Team Gaither. Bowie State’s Damon Wilson is the other Co-head coach.