For Nelson, the Road to the Nationals is Paved with Hard Work 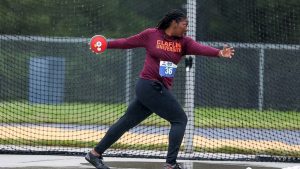 ORANGEBURG, SC (May 25, 2022) – It is no secret that hard work pays off. For Claflin University alumna, Zaria Nelson, that payment comes in the form of getting to compete in the 2022 NCAA Division II Women’s Outdoor Track & Field National Championship Meet. Throughout the 2022 indoor and outdoor track & field seasons, Nelson has established herself as one of the top throwers in the nation and now she will get the opportunity to compete against the best competition in the nation. Nelson was one of 377 of the top competitors in NCAA Division II women’s track & Field who each will be looking for the title of national champion. Nelson will compete in the women’s discus throw after completing a dominant season of competition in 2022.

Competing in the national championship meet has been a goal for Nelson throughout her competitive career and achieving that goal and is a significant achievement for Nelson. “It means a lot,” Nelson said. “Especially since I’ve never had the opportunity to compete nationally before.”

Nelson earned her place in the 2022 NCAA Division II women’s Outdoor Track & Field Meet after posting a provisional qualifying distance of 154′ 2″ (47.00m) at the Georgia Spring Classic hosted by Georgia State University. With the provisional qualifying mark, competitors for the national championship meet are selected from the pool of qualifiers. Fortunately, Nelson was one of 21 competitors from the entire nation who were selected to compete in the event.

While reaching the national championship meet has been a goal for, her selection was never going to be given to her without an effort. In fact, Nelson was in a training session when she found out that she would be competing at the national championship meet. “I was practicing for nationals. I was #17 before it was official and if I made it, I wanted to be ready,” Nelson added. “When it was officially announced, I was super excited.”

The trip to the national championship meet is the culmination of a tremendous track & field career with humble beginnings for Nelson. “I started competing in track & field in middle school at my local rec center doing long jump, high jump, and some sprints,” Nelson said. “It wasn’t until I got to high school that I decided to try shot out and discus.” The decision clearly paid off for Nelson as she went on to have a record-setting career at James Island Charter High School where she set and then broke her own school record with a 138′ 9″ throw in the discus. Her previous record of 120′ had already broken a school record that had stood for 28 years.

From there, Nelson went on to complete a dominating collegiate career. She began her collegiate career with a third-place finish in the women’s discus throw at the 2019 Central Intercollegiate Athletic Association (CIAA) Women’s Outdoor Track & Field Championships. Unfortunately, concerns regarding COVID-19 stalled Nelson’s and many others’ collegiate careers. However, Nelson came back to be a dominant force in the Central Intercollegiate Athletic Association (CIAA). She finished the 2022 season leading the conference in the women’s shot put with a 43’11.75″ (13.40m) to win the 2022 CIAA Women’s Outdoor Track & Field Championship and the women’s discus throw with a 154’2″ (47.00m), which she recorded at the Georgia Southern Spring Classic. She also placed second in the women’s discus throw with a 135’10” (41.40m) throw. The effort was enough to earn CIAA Field Events MVP honors at the conference championship meet. Now, she will have the opportunity to take her talents to the national stage.

Nelson’s knowledge of her sport separates her from many people as outsiders don’t fully understand the technical and athletic skills that go into successfully competing in throws events. She is often placed in the role of having explain the techniques needed to compete. “I don’t think most people understand the technique that goes into throwing a shot because it’s not a ball,” Nelson said. “If you throw it like one, you’re going to hurt yourself.” The situation is similar when it comes to the discus throw. “With discus, you don’t throw it like a frisbee nor do you grip it like you’re holding a book,” Nelson added.

In addition to succeeding on the track, Nelson has also achieved in the classroom as she completed her Bachelor of Science degree in Computer Science earlier this month. The degree was a culmination of a strong competitive career and a strong academic career. “It’s a major deal for me because I worked hard for my degree,” Nelson said.