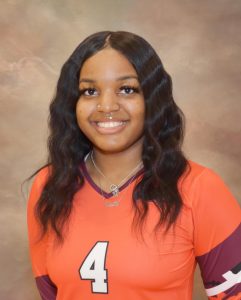 CHARLOTTE, NC (November 15, 2021) – Claflin Lady Panthers senior Trinity Fierce was named the Central Intercollegiate Athletic Association (CIAA) Volleyball Defensive Player of the Year, Monday afternoon. The senior earned the honor after leading the Lady Panthers to becoming one of the top defensive teams in the conference and to one of the most surprising seasons in recent history.

Fierce brought home the honor for her terrific effort at the libero position. She finished the season ranked second in the conference in digs per set (4.31). Though she was limited by injury, she was extremely effective when she took the court. She finished the 2021 regular season with 237 total digs. Her best match came against Elizabeth City State when she recorded 27 digs against the Vikings. She also had 26 digs against Bluefield State and 20 digs in a win over Johnson C. Smith. She also added eight service aces as well. In addition to being named the 2021 CIAA Volleyball Defensive Player of the Year, she was also a first team All-CIAA selection at the libero position.

She joined the Lady Panthers in the fall of 2018 and she has been one of the team’s top defensive performers from day one. She is a Mass Communication major and a graduate of Westlake High School.