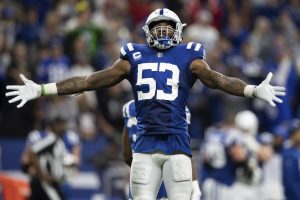 Indianapolis Colts linebacker Darius Leonard, viewed by many as one of the best players at his respective position, was named the NFL’s top-ranked inside linebacker by ESPN ahead of the 2022 season.

The article was put together by Jeremy Fowler, who “surveyed more than 50 league executives, coaches, scouts and players.”

“He’s already the most disruptive linebacker, and he can do things to clean up his technique and get even better,” a veteran NFL defensive player said to Fowler. “Sometimes you’ll see him standing straight up before the ball is snapped instead of in a linebacker position and you’re like, ‘What?’ But then he takes the ball away and you’re like, ‘Oh, OK.'”

Leonard, a four-time All-Pro selection who was No. 4 in last year’s rankings, has now climbed all the way to the top spot previously held by Devin White of the Tampa Bay Buccaneers.

Although he dealt with an ankle injury that lingered throughout much of the 2021 season, Leonard managed to miss only one game and put together one of his finest seasons as a pro.

While the star linebacker is expected to miss some time during training camp after undergoing back surgery in June, the team is expecting him to be ready by the start of the regular season.

Leonard is such a crucial piece to the Colts’ defense, and when he returns, he’ll look to continue his elite level of play in 2022.