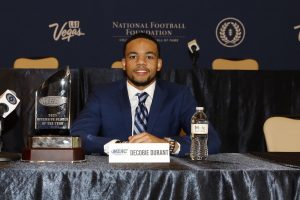 Both players were presented their awards by retiring MEAC Commissioner Dr. Dennis E. Thomas during the press conference.

“These two young men represent the continuing legacy of stellar student-athletes that this conference has produced since its founding more than 50 years ago,” said Thomas. “The work that they have done as both students in the classroom and athletes on the football field is a direct correlation to ideals taught by the institutions that they represent. So, congratulations are extended to them as they close out their college careers and take aim at what we know will be successful and productive lives.”

The Bulldogs’ Joe Thomas Jr, a linebacker, earned the honor in 2013, followed by defensive tackle Javon Hargrave in both 2014 and 2015, and linebacker Darius Leonard in 2016 and 2017. All three are on the NFL rosters and Durant is expected to get an opportunity as well.

Durant (DB, 5-11, 180, Gr., Lamar, S.C.), considered one of the MEAC’s top pro prospects, earned MEAC Defensive Player of the Year following a final season that saw him accumulate 37 tackles, including 29 solo stops. He led the league in passes defended.