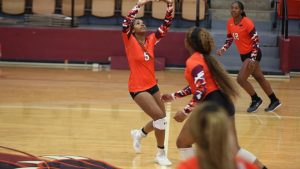 CHARLOTTE, NC  (October 10, 2022) – Claflin freshman setter Siri Davis has been one of the top freshmen in the Central Intercollegiate Athletic Association (CIAA) for much of the season. On Tuesday, she was recognized for her terrific play as when she was named the CIAA Food Lion Rookie of the Week.

She brought home the honor after some terrific play during the week. She helped the Lady Panthers compile a 3-2 record, including a pair of conference wins. For the week, she totaled 60 assists, including recording a career-high 16 assists at Saint Augustine’s. She added 10 digs in that match to record her first career double-double and she added five service aces in the match as well. For the week, she totaled six service aces along with 28 digs.

Davis and the Lady Panthers will return to action, Thursday when the team heads to Charlotte North Carolina to take on the Johnson C. Smith Golden Bulls. For more information on Lady Panthers volleyball, contact the Claflin University Office of Athletics Media Relations at (803) 535-5548 or log on to www.athletics.claflin.edu.