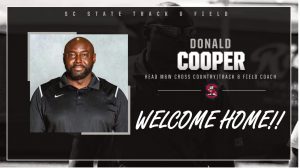 Cooper returned to South Carolina State after spending 11 seasons as Director of Cross Country/ Track & Field at Bethune-Cookman, where he consistently fielded teams that competed for the Mid-Eastern Athletic Conference championships and individuals who performed at the highest levels on the national stage.

PRESIDENT CONYERS
“SC State is proud to welcome Coach Cooper back to our campus and the Bulldog family,” SCSU president Alexander Conyers said. “His outstanding record in MEAC track and field speaks for itself, and we are sure his successes will continue with our student-athletes.”

“We are committed to making Bulldog athletics the envy of every university in South Carolina, in the MEAC and among HBCUs across the nation. Coach Cooper will be a major asset in that effort, said Conyers.”

“I would like to thank Coaches Katelyn Duke, Jarred Boan and Tatjana Matthews for their efforts to keep our cross country /track and field student-athletes engaged as often as possible as we worked through the hiring process,” stated Campbell.

Campbell noted,”With a knowledgeable and talented head coach, motivated student-athletes and a new track underway, I am extremely excited about the future of our track and field/cross country programs at South Carolina State. I look forward to welcoming Coach Cooper and his family back to Bulldog Country.”

DONALD COOPER:
“I want to thank AD Campbell and President Conyers for entrusting me to lead the track/ cross country and field program here at SC State University. The idea of returning in this capacity has been dream throughout my coaching career” stated Cooper.

Cooper noted, “Timing is crucial when making life changing decisions and the timing is just right.  My wife and I are ecstatic about the return to our alma mater where we met and began our journey together.  I have been blessed to do something that I love. Now with the opportunity to do it at a place I love is one of the greatest gifts that I can ask for.”

Initially hired as interim head coach in late September of 2009, Cooper quickly proved to be the strong leader the Wildcats needed, ascending to the full-time role the next season. He went on to guide the B-CU program through numerous milestones in each year since.

On the women’s side, the BC-U Lady Wildcats has had a representative at the NCAAs each of the past six years, while finishing in the top three in the MEAC at seven of the last ten conference meets.

Aside from intercollegiate coaching, Cooper has trained professional athletes in the National Football League (NFL), in addition to working with the National Youth Sports Program. He has done extensive work as a coach and guide-runner with the USA Paralympic Team, training blind and visually impaired athletes for the Paralympics Games.

A former MEAC standout, Cooper shined in both football and track & field at South Carolina State as a student-athlete. In track, he was an All-MEAC performer and conference champion in the 400m hurdles, 110m hurdles, and 60m hurdles. Cooper was named the MEAC Outstanding Outdoor Track Athlete in 1994. He was also an NCAA and Olympic Trials Qualifier in the 110m hurdles (1996). In football, he was named team MVP and played in the Walter Reed All-Star Game (1997). In the same year, he was signed as an undrafted free agent by the New Orleans Saints. He was inducted into the SCSU Hall of Fame in 2010.

Cooper received his Bachelor of Science degree in Criminal Justice with a minor in Psychology in 1997, and his master’s in Rehabilitation Counseling/Orientation & Mobility in 1999, both from South Carolina State.

He holds several certifications, including USATF Certified Official and USATF Level II Certified Coach in combined events, sprints/hurdles, throws and jumps. He is also a USATF Level I Instructor. He is also a member of Phi Beta Sigma Fraternity, Inc. and the Fellowship of Christian Athletes.

“There is tremendous work to be done, but I am not the one to shy away from hard work.  I look forward to immersing myself into the community,” stated Cooper. “For, not only the track and field alums but all alums to rally to her call as we begin the process to restore the program to its rightful place as a powerhouse within in the conference and nation.”