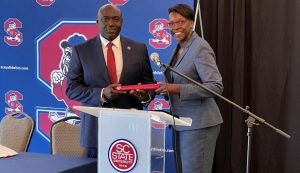 Cooper returns to South Carolina State after spending 11 seasons as Director of Cross Country/ Track & Field at Bethune-Cookman, where he consistently fielded teams that competed for the Mid-Eastern Athletic Conference championships and individuals who performed at the highest levels on the national stage.

A former MEAC standout, Cooper shined in both football and track & field at South Carolina State as a student-athlete. In track, he was an All-MEAC performer and conference champion in the 400m hurdles, 110m hurdles, and 60m hurdles.

Cooper was named the MEAC Outstanding Outdoor Track Athlete in 1994. He was also an NCAA and Olympic Trials Qualifier in the 110m hurdles (1996). In football, he was named team MVP and played in the Walter Reed All-Star Game (1997). In the same year, he was signed as an undrafted free agent by the New Orleans Saints. He was inducted into the SCSU Hall of Fame in 2010.

Cooper received his Bachelor of Science degree in Criminal Justice with a minor in Psychology in 1997, and his master’s in Rehabilitation Counseling/Orientation & Mobility in 1999, both from South Carolina State.

He holds several certifications, including USATF Certified Official and USATF Level II Certified Coach in combined events, sprints/hurdles, throws and jumps. He is also a USATF Level I Instructor. He is also a member of Phi Beta Sigma Fraternity, Inc. and the Fellowship of Christian Athletes.